A recent study published by the Applied Animal Behavior Science group concluded that cats like to sit in boxes, even if the container isn’t genuine. Is that so? I contend that anyone who has ever been owned by a cat already knew this nugget of information.

Influenced by the popular social media hashtag, the article was titled, “If I fits, I sits: A citizen science investigation into illusory contour susceptibility in domestic cats.” The “citizen scientists” were cat owners who were instructed to tape paper corners to the floor and see what happened. Most of the participating felines sat. No answer for the question, “Why?”, however.

Merriam-Webster defines illusory as “based on or producing illusion: DECEPTIVE.” The dictionary adds further, “ILLUSORY implies a false impression based on deceptive resemblance or faulty observation, or influenced by emotions that prevent a clear picture.”

Are cats fooled by the taped square outline on the floor? Do they believe that the sides are there? Does the need to sit in a confined space reach back to a primal urge? Cats certainly do not worry about how they look stuffing their size 12 body into a size eight space. Perhaps felines sit in boxes simply because they want to, and they can because they are cats.

I’m not sure that cats even know why but they all seem to live up to this behavior. Just look at Instagram, for instance. There are over 324,000 posts bearing the hashtag #ififitsisits. These photo entries all depict cats, with the occasional dog, bunny, or goat, sitting in boxes, bags, baskets, purses, suitcases, cabinets, drawers, dishes, pots and pans, pottery (sometimes with the hapless plant), and even painted or taped outlines on the floor. In many of these instances, the occupant is way too large for the receptacle. Yet, they sit.

The three cats here on our boat never miss an opportunity to jump into a box or bag that gets left on the floor. Wyatt often sits on the bathroom scale. If I am sewing, Stetson insists on holding down my fabric and patterns. Aspen loves sneaking down into the hold. I have no clue as to why my cats do it, but I can always use another photo to post on Wyatt’s Instagram account!

Until next time, be safe, and God bless! 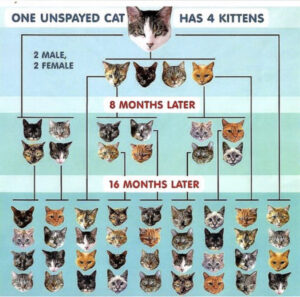 Thank you for visiting HSCG411.org

This website was created by Carmen Dowell & Earthclick which is located next door to the Humane Society (Dirt Cheap Copies) We can help you with all your web/ internet/printing needs.