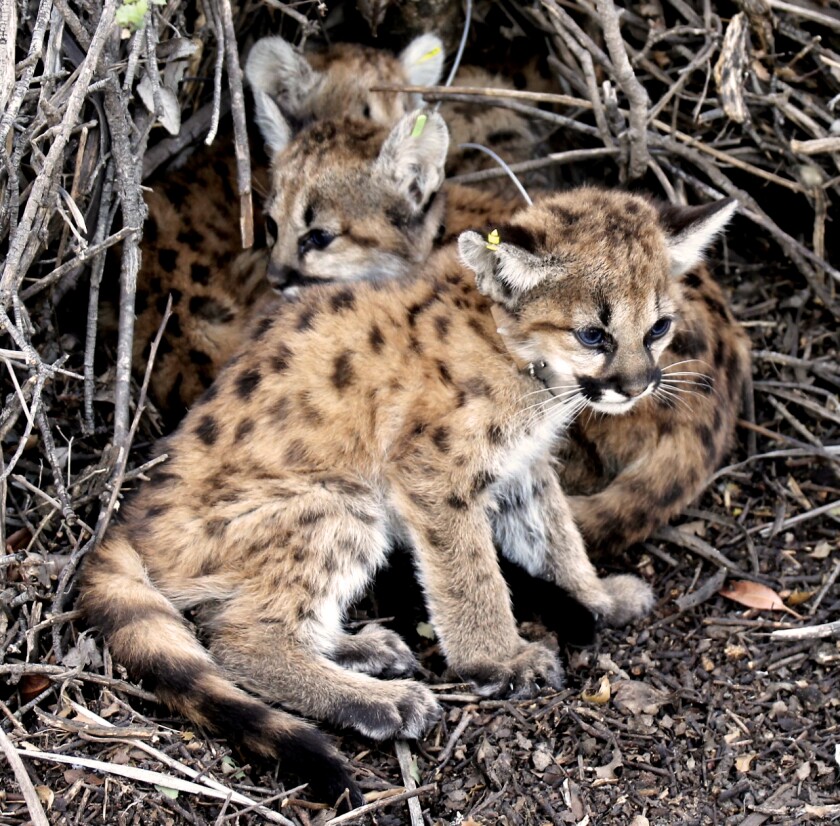 Two mountain lion kittens that died after being found outside a Thousand Oaks office complex had residues of three different types of rodent poison in their livers, the National Park Service said Wednesday.

The orphaned kittens, P-100 and P-102, were discovered last November and died a few days later.

A necropsy later found that they had rodenticide compounds in their systems, a heavy flea infestation, inflammation in their brain and feline parvovirus, a highly contagious virus that affects kittens.

They are the youngest mountain lions in the study of pumas in the Santa Monica Mountains to be found with anticoagulant rodenticides.

Biologists from Santa Monica Mountains National Recreation Area — who have been studying the region’s mountain lion population for the past two decades — said the report revealed several firsts for the study, officials said.

“This is the first time a mountain lion in the park’s 20-year study has been affected by parvo, and these two kittens are the youngest mountain lions in the study to have anticoagulant rodenticides in their system,” said biologist Jeff Sikich.

So far, 31 of 32 mountain lions have tested positive for exposure to one or more rodenticides, and seven have died directly from poisoning, according to Sikich.

Mountain lions can be exposed to the poison through the food chain, usually by eating another animal that ingested the bait, or an animal that ate the animal that consumed the rat poison.

Anticoagulant poisoning is the second-leading cause of death for local mountain lions in the Santa Monica Mountains and surrounding area, at least as far as human mortality causes go, according to the Park Service.

While not all mountain lions die from the exposure, it can adversely impact their health in many ways.

The kittens were part of a litter of four that were fitted with tracking collars in late November, when biologists added them to the research study. They were about six weeks old at the time — too young to survive on their own — and their mother wasn’t with them.

When biologists noticed that the mother did not return, biologists took the kittens to a local veterinarian, where P-100 and P-102 later died.

Their siblings, P-101 and P-103, survived, and are now at the Orange County Zoo in Irvine.

There have been other recent mountain lion deaths in the area attributed to rodent poison.

And in 2019, two mountain lions that were part of the study were found dead, both with signs that they ingested rat poison.